Short answer is yes, most insurance companies do add a charge for accidents even when you are less than 50% at-fault.

Most national companies have included this as a risk factor for years.  When national insurance carriers came in to Massachusetts, they employed risk factors that improved their models, as long as they didn’t violate existing state regulations.   One prohibited risk factor is the use of credit scoring for pricing auto insurance.  Used in 49 other states, here credit cannot be used as a rating factor for your auto insurance costs.  But “Not-at-fault” accidents can be. 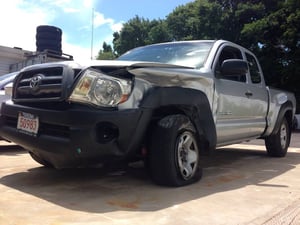 The practice of charging for not-at-fault accidents Is relatively new in Massachusetts for traditional Massachusetts-only carriers.  But models here have followed the national model more closely ever since ‘managed competition’ was introduced in 2009.

Why do they charge when I’m not at fault?

“At-fault” in Massachusetts has been the metric where all you need was for the other driver to be 51% or more at fault, and you were good.   They get the points, and you don’t.   This is reflected in the “Standards-of-Fault,  a boiling down of nearly a century of traffic case law, to identify “If XYZ happens, then the driver is assumed to be more than 50% at-fault.”  These standards still matter when at-fault points are assigned, so they’re worth knowing.  What they fail to acknowledge adequately is ‘contributory negligence’.

Contributory negligence acknowledges the reality that most accidents are not completely black and white.  More often we see 70-30, 60-40 or some other variation other than 100% - 0%, such as when someone hits your legally parked car.

What role does subrogation play?   (What is Subrogation?)

Subrogation is the process where, after the accident bills have been paid, the insurance company lawyers settle up.   For example, suppose I run a stop sign and hit your car.    You go to your insurance company; they pay the collision and your rental while your car is being fixed.  Once that claim is paid, your insurance company comes to my company and says, YOUR driver (meaning me) caused this accident where we paid collision and rental.  Here’s our bill.   If my company declines to pay, they go to court and a judge says, ‘Pay the bill’ to my carrier.   Since everybody knows this, they rarely go to court and resolve these issues based on known documented factors.

Let’s look at a more common example.  Suppose I come through a ‘yield’ sign; but it’s dusk and you don’t have your headlights on.    Assuming the same damage as in the previous example, my company could argue that you were 30% at fault for driving without headlights at dusk.  So they pay only 70% of the bill.   This process involves lots of dollars, so both sides take these negotiations seriously.   Some insurance companies do a better job than others.

One of our carriers only makes a risk charge if the at-fault cost share is greater than $1,000.  We like this approach as it ignores smaller accidents especially when you contributed less to the accident.

What can I do as a driver?

Practice defensive driving.    If you’re in an accident, document it.  Get a picture of the other driver’s license and registration.  Take pictures of damage to both vehicles, and note the time (especially dusk or dawn), and road conditions.  Complete your operators report as quickly as possible so you remember details, and document them.  Imagine your insurance company subrogation advocate looking for reasons to pay the other carrier less. This might result in no effect on your future rates.