Popular culture has largely portrayed a lightning strike as an event akin to winning the lottery or another extremely improbable occurrence. However, better data collection efforts over the last decade have shown lightning’s danger to be underrated at best.

To put the statistics in perspective:

According to the Lightning Protection Institute (LPI), lightning strikes thousands of people each year, injuring a few more than 1,000. Have you ever been afraid to go swimming after watching ‘Jaws’? Well the probability of being struck by lightning is approximately 30 times more likely than being attacked by a shark. You should be watching the sky, not the water around you!

I personally know two people who have been struck by lightning; one lived, one did not. While this is entirely anecdotal evidence, it does beg a question as to why lightning is generally not taken seriously as a threat. My personal theory is that it’s a combination of the misconception that lightning strikes are extremely rare and the commonness with which we encounter lightning.

Lightning can also be very damaging to property; according to the Insurance Information Institute (I.I.I.), there were 213,000 lightning related claims last year. These losses include damage to expensive electronics and structural fires. The I.I.I. further estimates that the average lightning claim to be $4,846.

If you are caught in a storm, pay attention to how you feel. If your skin beings to tingle, you hair stands on end, you smell an acrid odor in the air, or you get a metallic taste in your mouth, you might be about to experience a lightning strike. Get low to the ground and follow the steps below.
What to do and not to do (Compiled from the I.I.I, LPI, & Essortment):

Look to Gordon Insurance for more risk management resources! Lighting can affect your home, auto, and most importantly life and health, so make sure you're covered.

Learn more about your personal insurance options with us here. 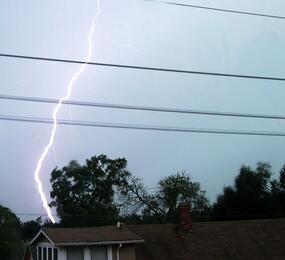 Thunder and lightning aren’t so frightening- but they can be other things, like “annoying.” If you’ve ever experienced a power surge, you know what I’m talking about.

Power surges happen when the electrical charge of power lines increases. With the greater electric potential, more electricity is free to flow from the outlet in the wall to your technology. When this happens, the excessive voltage causes the technology to create heat. This heat can immediately damage the system, but it can also affect the system gradually. For example, if a computer appears to function perfectly after a power surge, the system may be fine enough to operate, but internal damage has probably occurred.

You might be thinking that the chance of a power surge is very slim. After all, lightning can’t strike so often it affects us, can it? Truthfully, lightning probably won’t be the cause of your power surge. However, there are several other causes of power surges, and these are far more common than your typical lightning-induced surge.

For one thing, technology that uses a lot of electricity, such as air conditioners, refrigerators, clothes driers, etc., utilize a lot of power but at different times. The irregularity of these devices’ electrical use creates an unstable electric flow. In fact, about 70% of power surges originate from within one’s household. The remaining 30% of power surges are caused by wiring issues and downed power lines. As a society that uses electricity 24/7, the chance of a power surge happening is far more common than before. 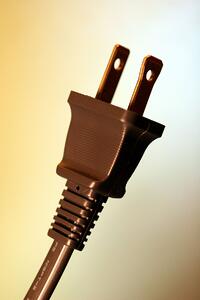 So, now that you know that power surges post an imminent threat to your technology, what are some things you can do to protect it?

1. Unplug. This is probably the most obvious solution. If your technology is not connected to the power lines, than any damage in the power lines cannot reach your technology. It’s that simple. However, unplugging everything may seem a little excessive. We definitely recommend that for rechargeable devices (such as laptops, cell phones, tablets, etc.) you charge ahead of time before any sort of lightning storm.

2. Surge protectors. Available at your local electronic store for around $20-$50, surge protectors have built-in protection against power surges. The amount of protection each surge protector provides varies depending on the brand and the actual item. One of the best aspects of surge protectors is that they are easy to use, and they often have several outlets, so you can have multiple devices protected from the surge.

3. Surge arrester. A surge arrester is a device that is installed at the main electrical panel of your house. It protects all the circuits in your house from any sort of power surge. Like protectors, these arresters have limits. Investing in one is definitely a good idea, even though these products are slightly pricier ($200-$400 range). These products are more likely to be sold in a home improvement store than an electrical appliance store.

If you have any other questions about insurance or risk management, feel free to contact us at anytime. Learn about personal insurance here.

We tend to think of the more common types of Homeowners claims such as fire, theft, wind damage etc. My dad always called his Homeowners policy his “Fire policy”.  “If it’s not a fire, I’m not putting in a claim”. Times have changed since then and homeowners look to their policy to help them share the burden of loss.

As an agent, one of my most memorable claims involved a pet pig. Hilarious- but true! My clients were awakened by lightning damage at their home. It seems that a lightning bolt hit the side of their car, knocking off both hub caps. According to the fire department, the lightning bolt then traveled underneath the paved driveway and knocked off the hub caps on the other side of the car. The bolt then proceeded to travel over to the gate of the Smith’s metal fence, hitting the electric lock and causing the gate to open. Fenced inside was the Smith’s pet pig. The pig became spooked and ran across the street and in the neighbor’s back yard. The pig then ran across the covered in ground pool and fell through the cover. The fire department successfully rescued the pig from drowning.

Sometimes, it’s good to sit back and laugh at insurance, which is usually a serious matter. Check out our website for more insurance information and resources, like our whiteboard video series.

If life always went as planned, it would be a lot more stress-free …but I would be out of a job. Unfortunately, sometimes disaster does strike; and rarely does it give much advance warning. Preparation and prevention only go so far, which is why insurance is incredibly valuable when you need it.

A house hit by lightning, with an ensuing house fire, is today’s best example:

Understand one thing about house fires: once they start, they accelerate geometrically, burning faster and faster until the house is consumed.  Every second that a fire burns translates to a increasingly large fire and more damage.   Response speed is critical; average response time is such an important metric for fire departments.

Fires are so damaging simply because of the steps necessary to put them out. When the fire department arrives to put a blaze down, they’re not thinking about your grandmother’s china. They’re going to get the water and flame retardants to the area as quickly as they can and as destructively as they need to.  The first objective is to extinguish the fire.

Even so, in many cases, the largest cause of damage after a fire is actually water. The thousands of gallons of water used to exterminate the conflagration will spread across the rugs, down the walls, into the flooring, and onto electronic appliances and toys.  No wonder fires are one of the most devastating disasters that can occur to a house.

Enter yesterday, when I got a call at dinner from a family that Gordon Insurance insures. Their house had caught on fire; the culprit, a lightning strike. It struck the house, blowing the electrical panel nearly off the wall and starting a fire right away.  Mrs. X was home, and went upstairs to investigate; she was shocked to see orange flames licking across the peak of her roof and moving fast.

She called 911 first and her husband right after, who was only a minute away. When Mr. X got home, he grabbed a portable fire extinguisher and unloaded it at the source of the fire.

Reasonable people will differ on the risk of trying to extinguish a house fire without training, versus the risk of losing the house while watching and waiting for the fire department. But in this case, the small fire extinguisher probably cut the ultimate damage of this fire in half, by stopping its progression.  Fortunately this fire was still small enough where quick thinking really made a difference.

Soon enough, the Norwell Fire Department arrived. One thing I will say about our fire department is that they do an awesome job at damage control.  They laid a tarp down to minimize water damage in the room affected, kept the water focused, and took proactive steps to minimize the damage to non-threatened property.  I’ve visited several fire sites in my day, and the guys from Norwell are about as good as they come.

With the fire out, we coordinated the water extraction contractors, discussed whether staying in the house was possible (insurance pays for a place to stay), got a company to seal the roof, and had a claim file set up and an adjustor assigned with the insurance company.  Work starts right away.

The blaze destroyed an addition on Mrs. and Mr. X’s colonial style house, but nobody was hurt.  All things considered, it could have been much worse.   Still, having your home burn makes for a scary lifetime memory, and the cleanup takes time, but quick thinking by the owner and great work by Norwell FD kept this house standing, and life is moving forward again.