If life always went as planned, it would be a lot more stress-free …but I would be out of a job. Unfortunately, sometimes disaster does strike; and rarely does it give much advance warning. Preparation and prevention only go so far, which is why insurance is incredibly valuable when you need it.

A house hit by lightning, with an ensuing house fire, is today’s best example: 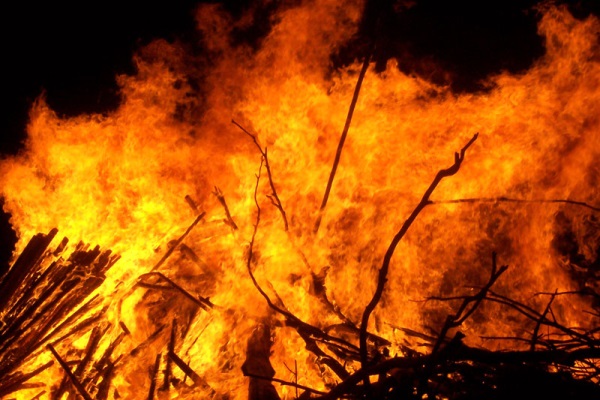 Understand one thing about house fires: once they start, they accelerate geometrically, burning faster and faster until the house is consumed.  Every second that a fire burns translates to a increasingly large fire and more damage.   Response speed is critical; average response time is such an important metric for fire departments.

Fires are so damaging simply because of the steps necessary to put them out. When the fire department arrives to put a blaze down, they’re not thinking about your grandmother’s china. They’re going to get the water and flame retardants to the area as quickly as they can and as destructively as they need to.  The first objective is to extinguish the fire.

Even so, in many cases, the largest cause of damage after a fire is actually water. The thousands of gallons of water used to exterminate the conflagration will spread across the rugs, down the walls, into the flooring, and onto electronic appliances and toys.  No wonder fires are one of the most devastating disasters that can occur to a house.

Enter yesterday, when I got a call at dinner from a family that Gordon Insurance insures. Their house had caught on fire; the culprit, a lightning strike. It struck the house, blowing the electrical panel nearly off the wall and starting a fire right away.  Mrs. X was home, and went upstairs to investigate; she was shocked to see orange flames licking across the peak of her roof and moving fast.

She called 911 first and her husband right after, who was only a minute away. When Mr. X got home, he grabbed a portable fire extinguisher and unloaded it at the source of the fire.

Reasonable people will differ on the risk of trying to extinguish a house fire without training, versus the risk of losing the house while watching and waiting for the fire department. But in this case, the small fire extinguisher probably cut the ultimate damage of this fire in half, by stopping its progression.  Fortunately this fire was still small enough where quick thinking really made a difference.

Soon enough, the Norwell Fire Department arrived. One thing I will say about our fire department is that they do an awesome job at damage control.  They laid a tarp down to minimize water damage in the room affected, kept the water focused, and took proactive steps to minimize the damage to non-threatened property.  I’ve visited several fire sites in my day, and the guys from Norwell are about as good as they come.

With the fire out, we coordinated the water extraction contractors, discussed whether staying in the house was possible (insurance pays for a place to stay), got a company to seal the roof, and had a claim file set up and an adjustor assigned with the insurance company.  Work starts right away.

The blaze destroyed an addition on Mrs. and Mr. X’s colonial style house, but nobody was hurt.  All things considered, it could have been much worse.   Still, having your home burn makes for a scary lifetime memory, and the cleanup takes time, but quick thinking by the owner and great work by Norwell FD kept this house standing, and life is moving forward again.

Should I Get Renter's Insurance?

Insure a Teenager: How to Add Your Teen to Your Insurance