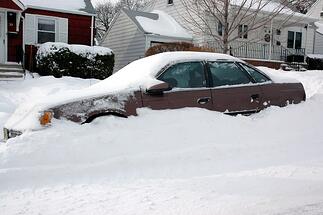 Who’s bright idea was it to name winter storms? Nemo? Really? I don’t know about you, but Nemo just doesn’t quite ring right. The Blizzard of 1978 conjures up powerful imagery of the superstorm of all winter superstorms. All I can say is our recent brush with Mother Nature will forever be the Blizzard of 2013 to me.

The Weather Channel apparently decided to name winter storms  in a bid to boost public awareness and coordinate response efforts. Guess I will never get use to winter storms being named after Disney characters. First, there is Nemo. What comes next?  Will a future storm be called “The Little Mermaid”?  Where will it end??

Okay, to be fair, Nemo was not named after a Disney character, but rather from the Greek name meaning “from the valley” or “nobody” in Latin.  Or perhaps Nemo is named after Captain Nemo, aka Prince Dakkar from Twenty Thousand Leagues Under the Sea. Regardless, I still don’t see the connection with a blizzard.

Once possible outcome of this seemingly innocuous public relations move to name winter storms is the possibility that insurance companies could apply a higher named storm deductible for damage from a named storm. While I have not seen this happen, it’s a possibility if a carrier carries policy wording that applies a higher deductible for damage from a storm which is named by the National Weather Service or any other recognized meteorological authority. The question remains if the Weather Channel is a recognized meteorological authority by insurers.

The Weather Channel apparently decided to name winter storms  in a bid to boost public awareness and coordinate response efforts. The Weather Channel announced that in addition to providing information about significant winter storms by referring to them by name, the name itself will make communication and information sharing in the constantly expanding world of social media much easier. As an example, Twitter hash tagging a storm (#Nemo) based on its name provides a one-stop shop to exchange all of the latest information on the impending high-impact weather system.

The naming of winter storms may have been a PR move by The Weather Channel but the naming could have broader implications within the insurance industry. The intent of a named storm deductible was to apply to tropical storms nearing hurricane strength. #Nemo and his successors open the door for some insurers to apply a higher deductible because now there is a name attached to a blizzard.

Fortunately, we have not seen a change in deductible practices with any of our carriers as result of winter storm naming. I do not foresee this changing but it’s an interesting twist to the named storm debate. Regardless, our most recent storm will always be #Blizzard2013 to me.

If you have more insurance questions, feel free to contact us here at Gordon Insurance by clicking the button below.