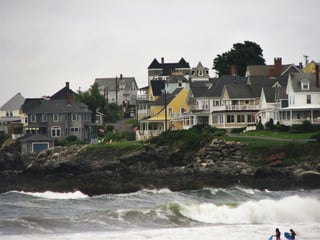 A private flood insurance market is beginning to emerge for homes and businesses in existing flood zones. The effect of this development on the NFIP's monopoly on flood coverage here in the United States will be significant.  If you are able to transition from NFIP to one of our private flood markets, read on!

A private market will provide innovation and cost savings for many consumers in flood prone areas.  Ultimately this will lower costs for many property owners.   But for others, watch out.

Rates used today by the National Flood Insurance Program (NFIP) have little relationship to actual risk.  This is a program designed by Congress, so political factors influence many characteristics.  For example, consider two houses side by side, same age, same size and value, same exposure to a flood.  But one is a ‘primary’ home where the family lives full time, the other ‘secondary’, a vacation home.  The primary home pays less because a secondary homeowner presumably can afford higher prices.   Affordability is not a risk factor with catastrophe insurance.  Thus some properties are subsidized, while others are priced to subsidize other properties.  Until now, the NFIP has had a monopoly on pricing: take it or leave it.  Private insurance challenges all that.

The private flood insurance market will be most competitive where they can underprice insurance for properties subsidizing others, that is, overpriced relative to actual risk.  They’ll do this by applying true  risk based rates, rather than those devised by the NFIP or Congress using factors such as homeownership as rating mechanisms.

The effect on the NFIP program is already evident.  Losing policyholders who subsidize other policyholders is chipping away at the foundation of National Flood subsidized rates.  NFIP likes its comfortable monopoly, and is not eager to give it up.  If properties priced to subsidize others leave the program, prices will have to increase, perhaps substantially.

NFIP isn’t making transitions easy for its customers.  We recently had a homeowner customer change from NFIP to a private program, saving about 50% or $2,000 in their case.   We sent the customer’s signed request to cancel the NFIP policy prior to the renewal date.  Unfortunately the bank (mortgagee) paid the NFIP premium from the escrow account.   NFIP would NOT cancel the policy, since they do not yet officially recognize the private market  (this may change with another act of Congress, but don’t hold your breath).   Thus, once the policy is paid, the premium won’t be returned, even with a signed request to cancel.   An appeals process is available, but again, don’t hold your breath. Careful coordination with your bank (to prevent payment) is important.   The bank must also recognize the private flood insurance.

The main lesson is in the payment details: If you switch to a private carrier and the flood insurance is part of the bank’s escrow for taxes and insurance, notify the bank in writing NOT to pay the NFIP bill.  If they pay it, you probably won’t get your money back from NFIP.

In addition, if you leave the National Flood insurance program and decide private flood isn’t for you, expect to need an elevation certificate and possibly higher prices when you do return.

The long-term economic issue is this: as private insurance offers lower prices to overcharged properties, subsidized insurance in high risk, loss prone areas must rise.  We have long predicted that the economics of the National Flood Program were precarious, and believe that the private markets' disruption of the existing program will hasten the national program’s decline.

The current program is today about $24 billion in debt to the U.S.  Treasury and Congress has been struggling with making the program revenue neutral for years.  With subsidized policies under threat from private insurance markets, this job just became harder.

Look to Gordon Insurance for guidance on this ever changing and fluid insurance program.

Risks of Hiring an In-Home Nanny

Six Things to do Before Your Child Leaves for College