In July 2012, Congress passed the Biggert-Waters Flood Insurance Reform Act of 2012 to address problems with the existing national flood insurance program. The program had been subsidizing over 1 million flood insurance policies around the United States and was running multi billion dollar deficits, with the current deficit at approximately $28 billion.

The combination of regular losses exceeding premiums collected, the specter of rising seas, and pressure of continued coastal development is not sustainable. The changes in Biggert-Waters meant ending subsidies for approximately 450,000 policies in flood zones, particularly for secondary homes, businesses, and properties with repeat claims. In addition, reduced subsidies on about 700,000 policies will happen upon sale of a house or business.

Removal of these subsidies has had a devastating impact on the real estate market in many coastal areas. The reality of real estate ownership is that affordability is measured to a great deal in monthly payments made up of PITI: principal, interest, taxes and insurance. To illustrate, imagine you are thinking about buying a beach house and you can afford a $300,000 mortgage at 5% over 30 years. The principal and interest payments for this would be approximately $1610 your budget for principal and interest. Insurance is separate, and we will leave out taxes for this discussion. If flood insurance costs on the property increase by $3000 per year, that's $250 per month. To compensate, the amount of principle that meets your monthly $1610 budget drops from 300,000 to approximately 250,000; this means the market value of this house has effectively just dropped by about $50,000. Many projected flood insurance costs are higher. A flood insurance cost increase of $6000 per year, or $500 per month, equates to a principal loan amount of $175,000, implying a decrease in market value of $125,000, over 42% in this same example. Clearly, removing subsidies that have existed since 1968 is extraordinarily painful for many people who have enjoyed these rates for decades. 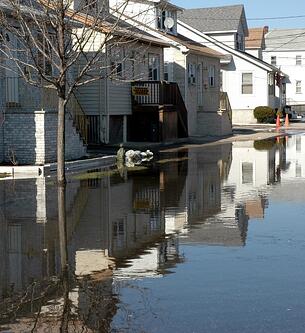 The chief architect of Biggert Waters, California Congresswoman Maxine Waters recently appeared on CBS news indicating that these increases were ‘unintended consequences’ of the legislation. Political pressure to delay the effects of Biggert-Waters has built particularly from southern states including Florida, Mississippi, and Louisiana where many properties with subsidies were being phased out. News reports late in 2013 indicated that a bipartisan deal had been reached to delay the implementation of Biggert-Waters.  In January 2014, the Senate voted to delay changes for another two years.  This would allow FEMA to review their plans and implement other changes.  Leaders from the House of Representatives have indicated that legislation has not been filed, nor when it might be filed. We will continue to watch developments in this proposed legislation closely.

There is a separate trend happening within flood insurance: mapping. New maps were expected to take effect here on the South Shore in June 2014, but have also been delayed by proposed "undo" legislation.  Mapping technology has advanced much faster than flood insurance maps have been able to keep up with, and the changes would have been more accurate.  The new maps will reflect available digital GPS technology, as well as recognize that new flood patterns emerge after every storm.

But flood maps aren't perfect. Often, the best thing a homeowner can do is to engage a qualified engineer to provide a certificate of elevation specific to their home. Our office is closely dialed in to the best engineers on the South Shore, so if you have not had an elevation certificate completed, call us for a list of qualified engineers at 800-649-3252. Learn more about flood insurance here.

How to Use Car Defrosters