Diabetes: Are You at Risk? 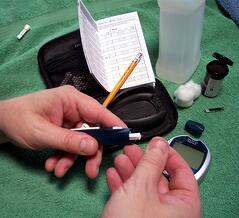 Having been recently diagnosed as "pre-diabetic" I thought it wise to get some information regarding the disease. So I "Binged" it and came up with the following definitions.

Hyperglycemia: A condition characterized by excessively high levels of glucose in the blood. It occurs when the body does not have enough insulin or cannot use the insulin it does have to turn the glucose into energy. It is often an indicator that the diabetes is out of control.

Pre-Diabetes: When a person's blood glucose levels are higher than normal, but not high enough to be Type 2 Diabetes. Risk factors include age 45 or older and overweight.

Diabetes: A disease in which the body is unable to properly use and store glucose (a form of sugar). Glucose backs up in the blood stream causing one's blood glucose (sometimes referred to as "blood sugar") to rise too high.

Symptoms: Symptoms of diabetes can develop suddenly (over days or weeks) in previously healthy children or adolescents, or symptoms can develop gradually (over several years) in overweight adults over the age of 40. Symptoms of diabetes include frequent urination, lethargy, excessive thirst, and excessive hunger. Treatment includes changes in diet, oral medications and in some cases, daily injections of insulin.

Types of Diabetes: There are several types of diabetes, but the most common are Type 1 and Type 2 diabetes. Type 1 diabetes, sometimes called juvenile diabetes, begins most commonly in childhood or adolescence. In this form, the body produces little or no insulin. In the United States, approximately 3 people in 1000 develop Type 1 diabetes. Type 2 diabetes is the more common form of diabetes and occurs in approximately 3 to 5% of Americans under 50 years of age and increases to 10 to 15% in those over 50. Type 2 is considered a milder form of diabetes because of its slow onset- sometimes developing over the course of several years and because it usually can be controlled with diet and oral medication.

Risk Factors: Individuals who are at a high risk of developing Type 2 diabetes include people who:

If you have any concerns about your health, do not hesitate to contact a doctor or a health professional. Learn more about life insurance here. Get some life insurance exam tips here!

Will My Insurance Cover a Trampoline?