We all know the story of the tortoise and the hare. The two race each other, and even though the hare has the obvious advantage of being much faster, the tortoise triumphs. The tortoise does this by diligently working towards his goal, whereas the lazy hare stops to take a rest break. Once he rests, he cannot catch back up to the tortoise. Valuable life lesson? Definitely. So besides the obvious moral of Aesop's fable applying to you with everyday life- i.e. work, studies, personal goals, etc.- how does this story apply to you today? 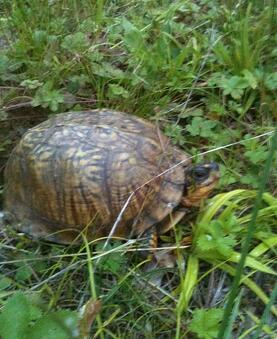 Maybe you've noticed them, and maybe you haven't, but there are turtles lining the streets EVERYWHERE. Driving recklessly or speeding through a neighborhood puts you, your car, and these cute little guys at risk.

It's been only one week of summer for me, but I've already "rescued" two turtles from car-related deaths, (or so I'd like to think.) The first one was tiny; he fit easily into a bucket. My friend and I lifted Ronaldo- yes, we named our turtle- into the bucket with a shovel. We filled the bucket with some water, and we carried him down to the North River. He was home, or at least he was far, far away from the street and the oncoming traffic.

The second turtle was not so easy. We dubbed him William, and William was a large snapping turtle who decided to chill in the middle of my neighborhood street. We could not lift him into a bucket; he snapped at us, and he was GIANT. So what we my friend and I to do? We had originally driven right on by, my friend believed William to be a curled branch with leaves, but I saw the truth. William was William, the giant snapping turtle. So we drove back.

We eventually got William to the side of the road. When we drove back to my neighborhood later that night, we did not see William on the side where we had left him. But, we also didn't see a squashed William in the middle of the road. We had fulfilled our roles as "Turtle-Savers."

The frequency of my rescuing turtles shows two things: 1.) Turtles are coming out now, more than ever. Maybe it's just me because of where I live, but there are bodies of water everywhere. Where there's water, there's bound to be a turtle. 2.) Sometimes turtles like to be in the road. DO NOT HIT THEM.

Turtles are living creatures just like you. Hitting one involves killing one, and think of all the other consequences. The horror your child will feel. The loud crunch of the turtle shell beneath your tires. The damage to your car. The massacred turtle on the road. All of these are negatives; there is literally not one positive thing that comes about from hitting a turtle. So don't.

Referring back to the fable at the beginning of this little spiel, go slow and go steady so everybody, including the turtles, can win the race. Avoid the turtles, and keep the wildlife safe.

Insurance for the College Student