What is Road Rage? 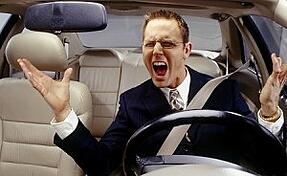 Road rage is when the driver of a motor vehicle becomes angry and aggressive, often affecting the other drivers out on the road and creating an unsafe environment for drivers. But there's more to road rage than meets the eye.

California is the only state which has given the term "road rage" a legal definition. This makes sense, seeing as the term "road rage" originated in California after shootings on the highway. In Driver's Education classes, road rage is still taught as a driving term, and while students may laugh at the prospect of someone whipping out a bow-and-arrow to use against another driver, such cases have been reported. The lesson here? Road rage is no joke.

Boston is one of the top cities in the country with high aggressive driving behavior. While there is no legal definition for "road rage" here, drivers can be charged with other offenses, such as aggressive driving- which certainly correlates/is a form of road rage. Other possible violations include speeding, reckless driving, driving to endanger others, etc. If you are enraged and driving, your car is essentially a large weapon. Keep that in mind, because if you are in an accident and somebody gets hurt because you were angry, your being angry is the farthest thing from an acceptable reason as to why you were driving so aggressively.

If you get road rage while driving, or experience another driver with road rage, keep these hints in mind:

Overall, the best solution for road rage is for everybody to remain calm. That is, if the hostile driver and the other drivers around them quickly realize the situation, adjust to common courtesy on the road, and continue onward with their lives, the roads of Massachusetts (and the rest of the world) would be a much safer place.

If you would like to update your auto quote, click the button below. We'll shop the best policies for you so if you are ever the victim of road rage, because now you know better, you will have the best protection possible. Learn more about auto insurance here.

The Biggest Insurance Discount: Bundling Your Policies Together