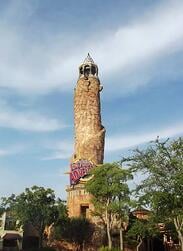 The first mini park you encounter (after walking past lots of shops in immediately after getting in) is Superhero Island. There's the Hulk, a roller coaster that I personally think is worth no more than a 30 minute wait. I love roller coasters, but after the first 15 seconds for me, the Hulk just feels bland. There's also a teacup ride for kids as well as many superhero themed shops. The Dr. Doom ride is just an up and down dropping ride, a style I love, but I would say don't wait more than 15 minutes for this one. For me, the highlight of the superhero park is the Spiderman ride. Similar to lots of the rides at Universal Studios, Spiderman is a motion simulator that's fast paced and exciting, if you love 4-D. There are some cool stores here too, and the heroes ride by occasionally on motorcycles!

After Superhero Island is the toon park; I personally don't spend too much time here, but the Dudley Do Right Ripsaw Falls is a water ride sort of like Splash Mountain at Disney. There's also a Popeye themed river rafting ride (the kind where ten people are seated in a circular float), which is a fun way to cool off after a hot day. Perhaps these cartoons just don't cater to my generation, but if you're familiar with these sort of cartoons it's a great place to check out!

Next is my favorite part of Islands of Adventure; Jurassic Park! The ground has cool leaf patterns and dinosaur tracks, and there's the infamous River Adventure Ride. This seemingly calm ride takes a surprise twist (and drop) near the end, and I wouldn't recommend it for little kids. There's a restaurant in this mini park called Thunder Falls Terrace, which is pleasantly indoors but with lots of windows and light. There are unique and healthy meal choices here, and it has clean bathrooms!

I'll save the Hogsmeade section of Harry Potter World for my next blog, and as I don't know anything about the Poseidon's Fury show, I'll skip that too.

Last is Dr. Seussland, a GREAT place for kids! There are soft serve places, candy shops, and the rides are low key but fun. The Cat in the Hat ride is similar to Disney rides, where you're in a cart and move throughout the story (this one is my sister's favorite)! There's also a One Fish Two Fish ride with the same setup as the Dumbo and Aladdin carpet rides at Disney, but there is water spraying involved! My favorite ride here is the High in the Sky Trolley Train, in which you're in a little cart and ride around over the park. You go into the ceiling of a restaurant! There's also a roof to keep you cool, and this is another calm ride.

Get some travel tips here, and read the first part of this Universal blog series!