On our first trip to South America we visited both the stark and beautiful Andes, as well as a few days in a Peru’s capital, Lima.

As American tourists, we stuck to the safest and cleanest sections in the city, and stayed in the section known as Barranco.   Barranco and Miraflores are two of the three or four districts along the coast known to be safe and clean, and there was plenty to do there for several days. 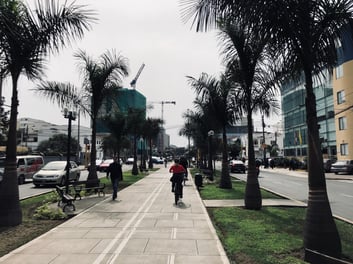 One of our first activities was a bicycle tour of coastal parks and sites. What jumped out for all of us was the dedication to bike lanes through parks and along streets.   In Boston, riding a bike can be a contact sport.  In Lima, the car traffic and bike traffic seemed to integrate safely and efficiently.   It was a great way to see a large section of coastal Lima with its beautiful parks and boulevards.

Lima comes right out of the Pacific Ocean, and the beaches along the coast are a mix of sandy and rocky with several sections producing good surf. 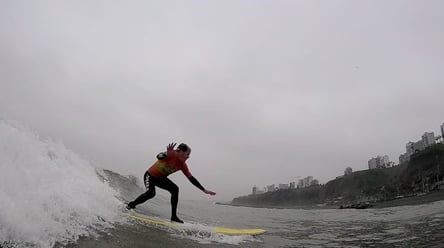 We joined Pucana Surf one morning, in spite of their website that says they speak no English. They didn’t speak much English but enough to outfit us with a good selection of wetsuits, then get us into the water, and safely up on our boards on 1 meter, but plentiful waves.  Check out the skyline on the coastline in this picture; we're surfing right off the City of Lima!

The food in Lima was spectacular, and lunch was particularly inexpensive.   I ordered ceviche for lunch each day when we were in Lima. Ceviche is a fish dish that uses lime juice and hot peppers to cook the meat.  Light garnishes of lettuce, corn, and potato slices made for beautiful presentations as well.  This is a specialty of Lima which our guide at Machu Picchu strongly suggested we try, and we did, and we all enjoyed it..

As potatoes are indigenous to Peru, there are some 200 versions of potatoes growing today. French fries, Papas Fritas in Spanish, can be served with many dishes. These are not McDonald’s string french fries; they are more like steak fries; you might get a half a dozen papas fritas out of one potato.  Ketchup is rarely served.

The most popular local drink is the Pisco sour. Pisco's origin came from Spanish restriction of wine cultivation and production in Peru. The Spanish overlords wanted locals to buy Spanish wine. But Peruvians created their own liqueur from grapes, some from Madera or Italian grapes, the liqueur now known as Pisco.  Mixed with lime juice, egg whites and plenty of ice, it is a delicious, tart, and cold drink. It was perfect for watching the sun set over the Pacific.

The people we met in Peru in general, and in Lima in particular, always seemed pleasant and eager to help us enjoy our stay.  Even language differences were never met with contempt, but rather, with mutual efforts to understand.

One inescapable observation was the homogeneity of the local people.  Some 40% of Peruvians are indigenous people, with similar size (shorter than most Americans), complexion and facial features.  In the United States we are so used to a broad variety of people, seeing so many people with such similar features was noteworthy and memorable. 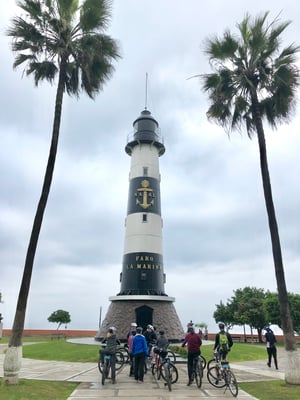 As is the case with many urban centers around the developing world, Lima has sections that are reflective of first world luxury and development, as well as third world poverty, inequality, pollution, and crime.   Of Lima’s 45 districts, 3 or 4 are clean and safe, while the other roughly 40 districts are characterized by Third World conditions including lack of clean water, lead-laden air pollution from old cars, and limited economic opportunity.   Crime there however, is evidently limited to petty theft; we heard that violent crime is uncommon.  Civil strife from two decades ago was evident nowhere.

For me personally, this trip was my first to a Spanish speaking country, so I was nervous with the language uncertainty.  Before our trip I downloaded a tourist’s app to get a basic grasp for directions, food, transactions and greetings: just enough to get by.   While Peruvian hospitality - particularly in tourist heavy locations - might have been more than we can expect from other destinations, having eased into enough Spanish to get around has given us the confidence to explore more of South America - and Spain - in our future.

This was a great trip, and Lima is a beautiful place to explore.