When our niece and nephew invited us to join them in Peru. We thought, Peru? Hmmm. Sure. Isn’t Machu Picchu down there?   Machu Picchu was indeed our destination for the first half of our trip, and the subject of this blog post!

Back before the Incas 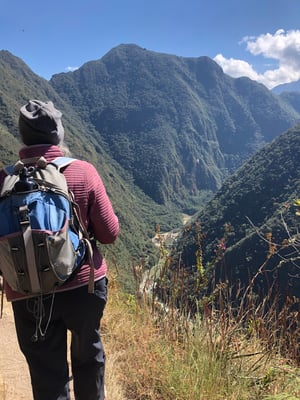 Most of us remember from elementary school social studies, Pizarro’s escapades in the 16th century high into the Andes, seeking the same treasure that Cortez had taken from the Aztecs.  Images of steep mountain terraces and conquistadors color my memories.  I had assumed the Incas had been there for centuries.

Not quite. The Inca civilization was actually only one hundred years old when Pizarro arrived, but they didn’t appear out of nowhere.  The Incas were a small tribe centered in the valley of Cusco which began a rapid expansion phase in about 1438.   One element establishing their reign was the construction of over 42,000 miles of footpaths; runners could transmit information from one end of the empire to another in a matter of days.  Incan kings extracted taxes not in the western tradition of demanding money or crops, but rather requiring 3 months of labor each year; thus were these roads and terraces built.  Today Incas remain; in the mountains many locals still speak Quechua, the native language of the Incas.

We landed in Lima, Peru’s capital, and immediately jumped on a flight to Cusco, the traditional Incan capital, an hour or two south, and 11,000 feet higher (3,400 m).  With a population close to a half million people, it’s one of the highest major urban centers in the world.  If you’re going to Machu Picchu, you’ll come through Cusco.   But we didn't stay long.  The same afternoon, we headed to Urubamba, a smaller town close to Machu Picchu, at an elevation of around 8,000’ (2500m).

Urubamba is settled into a tight valley surrounded by the steep, massive peaks of the Andes. The Urubamba River meanders through town, and a railroad line follows the river bed, ferrying tourists from Cusco through Urumbamba and on to Aguas Calientes, a small town at the base of Machu Picchu.

Wandering around the markets and small back streets of Urumbamba, we came across a Pentecostal fest in the town square, with band and dancing competitions and a genuine hometown feel. We also spent a morning riding horses along the river, exploring pre-Incan burial caves and marveling at the 12 month growing season.  It would have been easy to have spent more time taking in Urumbamba, but we only had only a week in Peru, and Machu Picchu beckoned.

There are several ways into Machu Picchu:  You can hike for four or five days with local outfitters; you can day hike roughly ten miles and about a thousand meters (3,000') of elevation gain; or you can take the train from Cusco (or from Urubamba), then a bus right up switchback roads to Machu Picchu.  We chose the day hike. 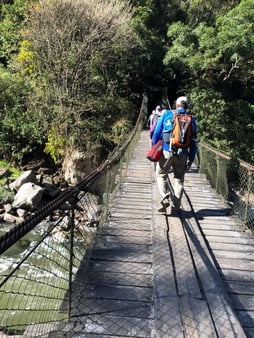 The day hike into Machu Picchu began when the tourist train (that for many began in Cusco 3 or 4 hours earlier) stops on the Urubamba River at a small footbridge.  The span wasn’t like in the movies over a great yawning chasm, but the bridge construction was similar: wood boards over a rope suspension bridge above fast water.  Once across the river, we hiked as we would in New Hampshire or Vermont, slow and steady rise carrying only day packs with a lunch provided by our outfitter.  Llama Paths was our outfitter, based in Cusco, and we all liked them.  They were professional and courteous for our orientation in Cusco;  Juan Joe (JJ), our guide, kept us moving, and encouraged water and snack breaks periodically.  He kept us engaged with his knowledge of Incan and Peruvian culture and history.  He occasionally spoke Quechua with the porters who'd pass us from time to time.

Since there were eight of us spanning in age five decades (30’s to 70’s), we traveled at an easy but steady pace.  An early highlight was emerging from the woods into alpine pasture and seeing the Urubamba River below. It gave us gave us a sense of accomplishment after our climb, and the open views to higher alpine landscapes were breathtaking.   Soon we could see Chachabamba, a great terraced site, an emerald green amphitheater across a drainage from us, our next destination.  While it appeared close, the trail kept elevation around the drainage, so it took longer to reach Chachabamba than we expected.  The quality of engineering and stone workmanship was evident throughout the terraces, still structurally sound after 500 years.

Just past Chachabamba, we broke for lunch, which Llama Path had prepared for us: chicken in quinoa salad, an avocado that was perfectly ripe, and apple and energy bar. It was all healthy and delicious.

With lighter packs, rested bones and a well-worn trail without much more elevation gain, we soon entered the “Sun Gate”, a saddle on a ridge where the sun rises on summer solstice (December 22) from the perspective of the main altar rock at Machu Picchu.  So the magnificence and beauty of Machu Picchu was below us from the Sun Gate, replete with its own stone terraces and pillar work.  We hung out there for a little while to take pictures (see below) and just take it all in. The walk down to Machu Picchu was quick, and with it in our sights the whole time, its vastness and splendor became more evident with every step.  Plus, being mid-to-late afternoon, all the tourists were gone.  While there were a few other people still exploring the site, we more or less had the place to ourselves. 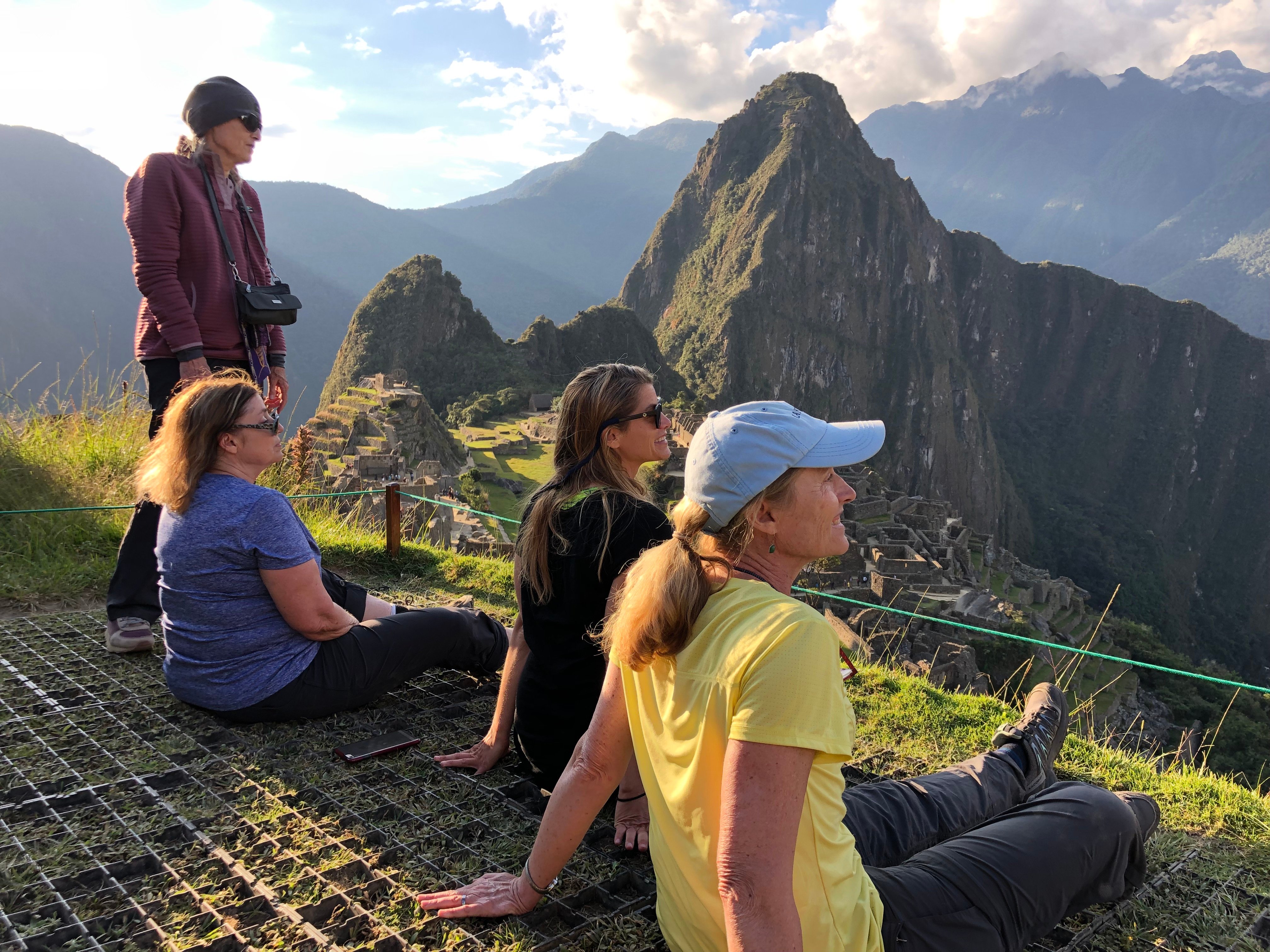 There is a new town below Machu Picchu named Agua Calientes, straddling the banks of a river feeding the Urubamba.  We headed there for dinner and a hotel bed. The town was built to accommodate tourists to Machu Picchu, so is not old, though it was built to look like an old quaint mountain town.  There is a great market where local people sell their sweaters, paintings, zamponis (a local wind instrument made of 13+ bamboo tubes) and other wares. Restaurants and gift shops line the streets, and Peruvian and Incan memorabilia are for sale in Agua Calientes.

We came back up to Machu Picchu on the bus, early, before 7AM, when bus transfers for the public begin.  Because we had hiked in and secured a permit for the day’s climb, the early arrival, before the crowds was a blessing. This is one of the benefits of seeing a place like Machu Pichu with a good outfitter: they have the inside track to help guests see and experience the beauty without the inevitable crowds.  That morning JJ gave us the historical tour of the main sites in Machu Picchu early, and we learned about the engineering (drainage was everything), the history of discovery in the late 19th century, and more about building and farming. 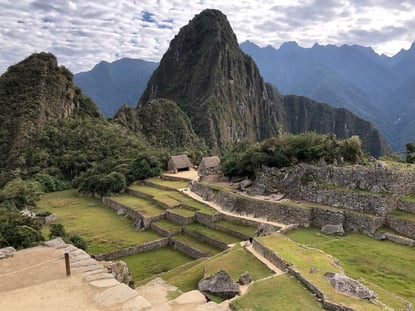 After the tour, we left JJ and ascended Wayna Picchu on our own.  .  Wayna Picchu is the conical-haystack looking mountain adjacent to Machu Picchu, easily ascended from the Machu Picchu Park, but separately controlled - you need a pass.  200 Passes are available for a 7AM ascent, and another at 10AM.  The trail is steep and narrow, so a climber limit is necessary.  The hike was not technical, but steep pretty much the whole way.  Cables and rails helped provide stability.  I strongly recommended this climb for anyone who can climb a NH 4000 footer.  The views back down upon Machu are spectacular and the sense of accomplishment is hard to dismiss. 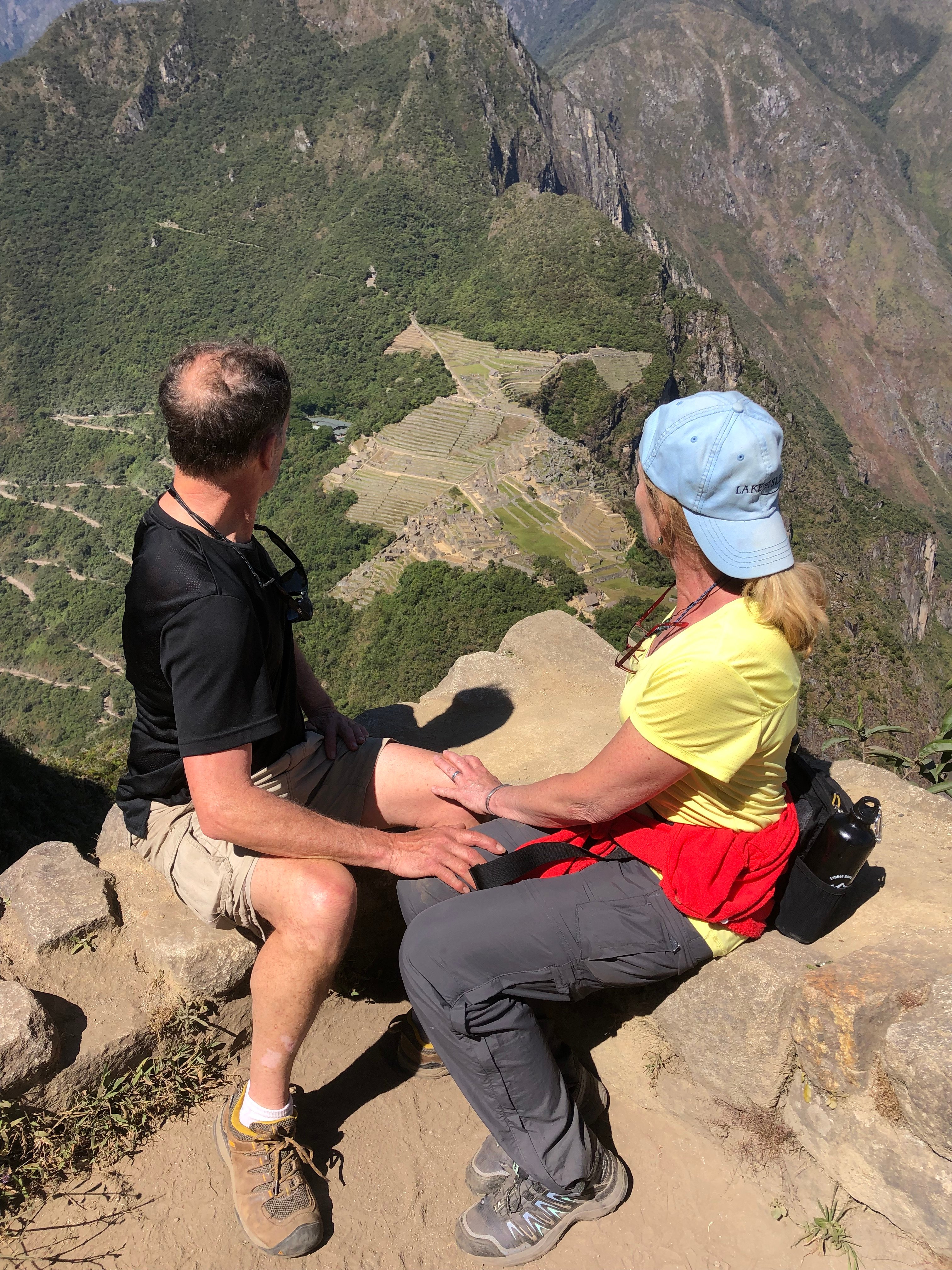 Once down from this peak, we took the tourist train back to Cusco for a small town stay, enjoying the pentecostal festival, and taking in some of the local culture.  The day hike across the Sun Gate, and the hike up onto Wayna Pichu mad e a good trip to a beautiful place even better.

A final comment on language: Even with a limited knowledge of Spanish that i picked up on the flight, we were able easily to eat, get around, buy sweaters and other memorabilia, and enjoy the scenes.  The people were universally polite, friendly and accommodating.   While many vendors and wait staff speak a little English, communicating with those who don't is not impossible.  A smile and a 'we may be surprised but who cares' attitude is often enough to make it all worthwhile.

Following Cusco, we headed to Lima for a few days in Peru’s capital.  For that wholly different experience,, check out my next travel blog.  This unexpected trip became a fun adventure.