There are now two Harry Potter worlds at the Universal parks in Orlando. Hogsmeade has been in the Islands of Adventure park for a few years, but Diagon Alley just opened last summer! The Hogwarts Express is there too, a train that connects the two parks. 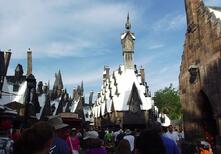 I'll start with Hogsmeade, the older park. To be honest, although I have been a HUGE Harry Potter fan my whole life, this park is a little disappointing. There's a dragon ride roller coaster for little kids, but the only big attraction is the ride within Hogswarts castle. And if rides make you sick easily, or if you're with young children, I would NOT recommend this ride at all. It's like you're strapped into a roller coaster with the overhead reinforcer, but the ride does not move straight forward. It turns and twists so that you'll be laying upwards facing the ride, then moves you upright, facing down, and any which way. I love extreme rides, but this isn't one of my favorites.

The architecture in Hogsmeade is beautiful. Although tourists often come in the heat of the summer, the snow and buildings are super realistic and it's like being in England. There's a singing show, as well as a few general clothing and souvenier shops. I do love Honeydukes (the candy shop), and there's also the Hog's Head Pub. However, there's not much to see. A huge portion of the park is literally just benches and seating areas for all the people waiting for their family and friends on the rides. Seriously, whenever I'm at this park, there are hundreds of people just sitting around. You should visit this park at least once for the candy shop and experience, but be sure to take the Hogwarts Express over to the new, better park!

I LOVE the Diagon Alley park! It's much, much larger than Hogsmeade, and it's also more detailed which makes it fun for the devout Harry Potter fans like me. The buildings are colorful, gigantic, wacky, and beautiful. It feels like you're in the books/movies. You can stop at the Leaky Cauldron for lunch, which offers a ton of nontraditional theme park options; instead of just chicken and cheeseburgers, there are a ton of realistic Harry Potter foods, such as Beef, Lamb, and Guiness Stew! You can also have some famous (nonalcoholic, don't worry) Butterbeer!

There are a ton of specialized stores, unlike in Hogsmeade. For example, instead of just general merchandise, one store has specific broom and outdoors items, while another hosts the dark magic items (this is the shop where Harry ends up in one of the movies!). Gringotts Bank is the highlight with a huge, fire-breathing dragon on top and an AWESOME ride inside. It's sort of like a roller coaster, but even if you don't love rides, walk into the bank (where the line for the ride is). It is built to be just like the one in the movie, moving goblins, chandelier, and all, and it is breathtaking. The ride itself is easily my favorite ride ever; it's fast paced, interesting story, beautiful animation, and a thrilling plot.

Pretty much every kid in either Harry Potter park is walking around with a wand from Ollivander's, which are in both parks. Even if you're not interested in paying $40 or so for a stick, I definitely recommend waiting in line for the Ollivander's presentation, where someone is chosen to receive a wand (I saw the one in the Ollivander's in Diagon Alley).

Check out my first two blogs on Universal Studios and Islands of Adventure, and read up on these great travel tips! Don't forget to contact us with any travel insurance or vacation safety questions!