Striped Bass on the South Shore

The great sport fish, the striped bass, is making its way up the eastern seaboard, and the buzz with local anglers is palatable. Most stripers that come to Massachusetts Bay wintered in Chesapeake Bay with its rich estuaries and moderate temperatures. Each spring they begin their journey north in search of food. They're due.

The food of choice around here are herring. Three herring spawning brooks feed the North River and are aptly named the First Herring Brook (in Scituate), the Second Herring Brook (in Norwell, where my father had a trap line behind his house as a kid), and the Third Herring Brook, the boundary separating Norwell and Hanover. Over the past several years, the North and South Rivers Watershed Association  has led an effort to remove dams from these brooks. Dams had powered mills back in the day, but lost their economic usefulness decades ago.  Their removal has paid off big in the resurgence of herring stock. Even native trout, gold standard habitat seekers, have returned to these brooks. 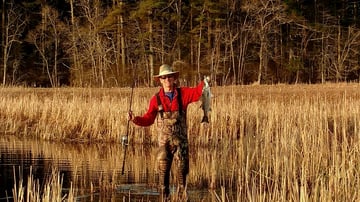 Resurgent herring bring more than striped bass. The North River is alive with cormorants and ducks, egrets and great blue herons, and osprey and eagles. Every fisherman knows, here there are water fowl, there are fish.

The herring count in 2019 has been epic. Stop at the Third Herring Brook where River Street (Norwell) becomes Broadway (Hanover), through a pair of polarized glasses be amazed at the number of herring making their way up-stream. This food supply is why Stripers like the North River and nearby ocean.

Today (early May) in Massachusetts Bay the water temperatures are getting to the high 40’s, so the migrating fish aren’t be far behind. Edgartown water is now at 50 degrees (in early May); Plymouth and Mattapoisett are at 49. These temperatures are a few weeks late this year with all the rain and cloud cover  (often the first fish arrive the third week in April). But they're where the fish are comfortable enough to begin feeding here.

A lot of fishing is done alone, or with a single fishing buddy.  I personally like the alone time.  But fishing can be a great community event, such as the annual  NSRWA fishing tournament, happening in just a few weeks, the weekend of June 7-9.  That linked page will also describes many best fishing practices.

The overall striper population is under pressure on the East coast.  Overfishing and loss of spawning habitat in the Chesapeake are two commonly cited reasons.  With recreational anglers taking 75% of the fish (commercial fishermen taking the rest), a careful harvest is in everyone’s best interests.

Studies estimate a 9% mortality rate by recreational fishermen of caught and released striped bass . What can a recreational angler do to keep more fish alive? 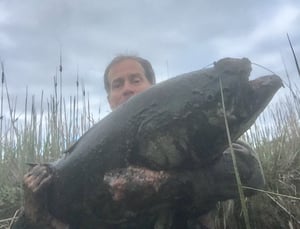 Respect the water and the habitat. Most fishermen are great stewards of our natural resources: that’s why we’re out there in all kinds of weather at all times of the day.   Retrieve debris including all your own line and we’ll all continue to enjoy the great outdoors, and with any luck, even catch a fish or two.

Your guide to summer in Massachusetts