This book is a biography of cancer, the history of its treatments, and the incredible people who dedicated their lives to understanding and fighting the disease.  The book was a difficult read for many of us, both because of the necessary science new to many of us, and the parade of anecdotes about cancer, its victims, and the herculean efforts to understand it.   Bill found it easy and fluid, as did a scientist friend of mine.

Appropriately, Rob began our discussion by asking about Sidney Farber.  Farber was a driven man, giving up all else in his life in the focused pursuit of understanding cancer.  We were struck by how many people in the pantheon of cancer research were like Farber: highly focused, intelligent, giving up so much of their own personal lives to understand. A good start for our discussion, as the book eventually reveals he was one of many heroes. 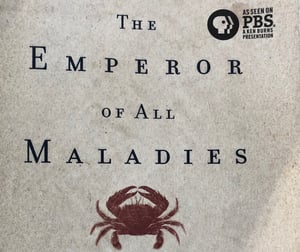 Farber operated out of the basement of Children’s Hospital, with limited funds, and scant assistance in his early days.  The financial cost of developing drugs is staggering,  Farber was doing work before a financial return was even conceived.  Our discussion turned to Mary Lasker and her incredible private fund raising machine, which ended up benefiting Farber’s research, and trials.

One of Farber’s contribution to the science was use of anti-folates.  Using chemicals to treat biological conditions, cancer, was new.  So new that in 1950, half the drugs in use had not been invented in 1940.  But chemotherapy (chemo – chemicals) more fully articulated by Ehrlich, with chemistry interwoven into biology is a mainstay of cancer treatment today.

Others, too many to list fairly, include Freireich and Frei, yin and yang, brought together by Gordon Zubrod in 1950s; they showed that working together could work when united by purpose to understand.   Bradford Hill, English statistician, demonstrated that randomized trials could create some order out of the chaotic previous cancer studies.  One of the reasons leukemia (cancer of the blood) was one of the first cancers with effective treatments is in the very nature of blood: cancer concentration can be measured.

Another hurdle was getting past prior practices and the chaotic nature of research.  Radical surgery developed by Halstead in the late 1800’s continued until the late 1960’s when better statistical analysis demonstrated that excising organs and musculature was not achieving any meaningful extension of life.  Once accepted in the treatment, it had continued for 70 years, demonstrably fed by egos and misplaced science.

Cancer is the perfect machine: figures out how to survive, mutates to keep surviving.  Difficulties understanding the causes were first; absence of understanding causes, cures were nearly impossible, except for accidental discoveries.   An early breakthrough began with chickens and Peyton Rous: Rous studied chicken sarcoma in the 1920’s.  He learned that transplanting a tumor from one chicken to another would transfer the cancer to the recipient chicken.  He began filtering the cancer tight down to the cellular level; and the cancer kept transferring.  The cancer was somehow happening within the cells, at a molecular level.  But DNA and RNA had not yet been sequenced.  This insight into cause was initially a mystery.

Cancer is primarily a genetic disease.  We all know today that some families have higher chance of cancer in subsequent generations than others.  But exogenous factors contribute as well.  Many examples were discovered as early as the 19th and early 20th century: Chimney sweeps got testicular cancer, tobacco causes lung cancer.  Where the book examined cytotoxins and genetics reiews of ras, myc, neu and oncogenes, the non-scientists struggled.  Our discussions stayed out of the science, and trended along the human effects.
To that end, we invited Dan, a friend whose Caring Bridge updates kept many of us in daily touch with him as he endured chemotherapy and radiation last fall, to tell his story.   Dan is blessed by a generally healthy family, but noticed a lump in his throat about a year ago.  His primary physician had him but see an ear, nose throat specialist in spite of a negative blood test.  The day following the Ear Nose Throat visit, he was in Mass General for further tests. While there one day, he ran into an old Norwell acquaintance who has suffered for years with cancer; he said, ‘Go to Dana Farber’.  The patient focus there is different from the scientific focus at MGH.  First is their team approach: the first visit was with an oncologist, a surgeon, and a radiologist.  This group took a month for treatment protocols, not because they’re busy, but because of the complexity of determining the best treatment: physicists model the radiation, in two blind analyses, then bring to the physician team; this all took a month.  The result? Chemotherapy every Monday, radiation every day, seven weeks.   Surgery was out, too close to the voice box. By the end of the treatments, Dan was barely able to eat, unable to work, weak and in pain.  Incredibly, Dan joined a back-country ski tour in the Dolomites three months after his treatment concluded.    6 months later, Dan is cancer-free, and already, the protocol for his cancer has shortened, and what was Stage 4 is now considered Stage1.  Such is today’s progression.

His cancer arose from earlier HPV, and is characterized by predictable behavior, not fast moving.  The same cancer that arises from smoking or drinking is harder to treat: faster to mutate, faster to react to drugs.  This was a personal example of the different forms cancer takes, in this case highlighting the difference between exogenous factors and genetics.  Rick had a similar story within his family: removing highly at-risk organs that can be removed can be a life extender.

Dan’s insight also brought us to his experience with the people: the broad spectrum of where people are in life, how we react to treatment, how the disease affects our existence.  And as poignantly, how do the care givers do it?

Today, cancer research is funded from three sources:  Rob said he sees a lot of companies trying to make progress in cancer, where financial incentives, in the face of financial risk, can be enormous.  Another is our tax dollars: in 2018 the National Cancer Institutes spent $6 Billion.  And then there is the academic and privately funded research.  The Jimmy Fund - started with Boston Braves, then resurgent with Ted Williams and the Red Sox – has been a mainstay of research benefiting cancer patients.

The return of “Jimmy” from New Sweden, Maine, as an old man, lifetime cancer survivor, was one of the fine loops that author Siddhartha Mukherjee added for his humanity angle.  Carla Reed appeared from page 1 sporadically throughout the book to remind readers of the humanity of this emperor of all maladies 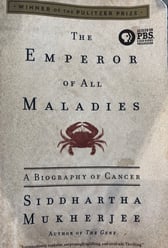 As understanding the causes of cancer developed, so have the protocols.  The classic example we’ve all

lived through is the connection between cigarette smoking and lung cancer.  Many of us watched our parents give up smoking.  Most of us have never smoked.  The Surgeon General’s warning was a single manifestation of the public’s rejection of tobacco companies’ assurances.  Similar public mobilizations in medicine have followed the efforts of Mary Lasker: AIDS. Ice-bucket challenge, heart disease.   The public is now often on board.

How lucky are we to live near Boston?  The recent recognition of William Kaelin Jr as Nobel Prize winner in Physiology (Medicine) for his insight into oxygen deprivation affects kidney and other cancers, will help Dana Farber attract money and talent.  And while people from around the world travel to Boston, we should pause to complain about the traffic.  Just ask Dan
.

Our Next book: Empires of Light: Edison, Tesla and Westinghouse: the Race to Electrify the World

Bad Blood - The story of Theranos

Empires of Light: Edison, Tesla, Westinghouse, and the Race to Electrify the World