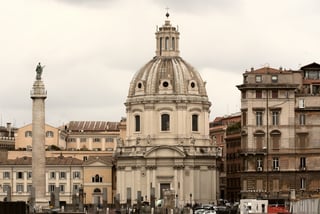 This book was a slog, and only began to flow with the arrival of Caligula past the book's halfway mark.  Nero seemed to be Holland's favorite Caesar.   So began our book club review of Dynasty.

The book chronicles, in detail that seemed difficult to believe in many passages, the lives of Rome's great line of Caesars, from Julius Caesar to the august Augustus Caesar, Tiberius, Caligula, Claudius, and Nero.  The writing was dense, characterized early on by sesquipedalian (long winded, characterized by long words) prose.  And yet it was another book most of us were glad to have read.

The early part of the book chronicled extensively the intrigues of family and political maneuvering of Rome, from the wolf's enduring influence beginning with Romulus and Remus, past the brutality of Tarquinius the Proud, the politics of the First Triumvirate, and into the second Triumvirate.  The second Triumvirate included Marc Antony, Julius Caesar, and Marcus Lepidus, and most of us know how Marc Antony's trysts with Cleopatra worked out (not well for him), better for Julius Caesar.  Until the Ides of March.

With that background set, much of the early book was duly dedicated to the ascension of 'the young Caesar", Octavius.  When Octavius decided he wanted Nero's wife, Livia, whom we had met in an earlier chapter, we had an early sense of how raw power worked in Rome.   At least the young Caesar waited for Livia's child to be born before marrying her.

This was the Caesar who would take the name Imperator, Princeps, Pontifex Maximus, and ultimately “Augustus Caesar”.  His early brutality to his enemies and skillful consolidation of power with the Senate’s guarded blessing, was masterful.   Jeff reported that he is considered the richest man in the world, ever, having been assigned a current-day wealth of some $3-4 trillion.  He owned Egypt, after all.  Under his leadership, he expanded Roman control to Hispania, Germania, and Egypt, and the wealth transferred from those vanquished places, plus the continued taxes extracted annually, permitted lavish spending on his family, and of course, on Rome. He was by most accounts, the greatest of all the Caesars, and no doubt the most enduring.

His moderated way had limits, however, as the exile of his daughter Julia to Pandateria demonstrated as well as Ovid’s exile to Tomis.

In reflection of the building during Augustus' reign, we discussed the infrastructure, and particularly the vulnerability to famine Rome often faced, due to vast sourcing of grain, imported primarily from Africa.  Today Italy is a leader in farm-to-table food sourcing and culinary arts, but Rome was not so well developed, the Appian Way notwithstanding.

We also marveled at Roman engineering, particularly aqueducts, wishing that the book had explored Roman engineering further.  Pompeii, the novel by Richard Harris is one such source offered by Geoff.

In a similar vein, and based on Ovid's observation that no art nor peace can exist without the art of war, we all would have liked to have known more about the Roman war machine.  We did learn the soldiers could not marry, but did have license to kill, unlike Roman citizens.  And learned a little about discipline: order a soldier to go, he goes.  Order a soldier to come, he comes.  Until discipline breaks down and centurions or other leaders are horribly killed by their troops.  But the discussion of the military was relatively superficial.

We made comparisons between then and today, and talked about the predisposition to make judgments about mores of the past throughout own contemporary lenses.  Geoff offered that his long reading of history kept him from making judgments while simultaneously describing many Roman practices as brutal, depraved, or odd.  Such are our prejudices, based on our unique personal experiences.  Rick offered that his extensive travel has helped him appreciate different ways of behaving or thinking for what they are: different, and we all agreed.   That understood, the sexual activities of Caligula and Nero in particular, were hard to accept as anything but weird.

Comets, monsters, and myths presented as reality were also part of life in early Rome.

The women, Livia and Agrippina in particular were noteworthy in their influence, particularly given the male dominated society on so many other ways.  We wondered how effective ordinary women were; not just the wives of Caesars.  This thought line brought up another sense, that the book could have been more readable if it had developed even slightly topics beyond the Caesars and the people directly within their sphere.  Again, Richard Harris’ novels, including Imperium and Lustrum do that job suitably.

Otherwise the treachery among people of power was noteworthy: At its extreme, consider Nero, who killed his brother Britannica, took his confidant, Otho's wife, then killed his own mother Agrippina, then kills his wife Octavia to marry Poppaea Sabina, whom he kills “accidentally” by kicking her in the stomach while pregnant.

Overall, the book read as an academic tome, and we all agreed that while it was interesting and full of facts, it felt like a professor’s imposition, and could have been better presented.  Online reviews, however, disagree with our take, and almost exclusively praised it.

Next Book: Our next book is Five Easy Theses by Jim Stone, a Boston insurance executive and respected economist.  This should make for good discussion of our country’s direction when we meet next on the third Tuesday in October, October 18 at 7:00 PM at Bonnie Lea.

The Big Short by Michael Lewis