The Old Man and the Sea: A Book Review

Ernest Hemingway’s literary classic, The Old Man and the Sea, tracks the endeavor of an elderly Cuban fisherman, Santiago, as he is dragged across the gulf by a huge marlin. Santiago proves to himself and the rest of his town that even the elderly can manage.

The Author and Style

The book earned Ernest Hemingway a Nobel Prize and rekindled his fiction career. Hemmingway cleverly uses an elderly but strong man rather than the stereotypical macho youngster. The writing style is energetic and inspirational. How great a beast would it take to stop a man with a mission? 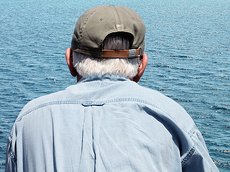 At times the book could get repetitive. Repeated thoughts of his ex-apprentice occurred and the entire story is based on a four day struggle being dragged by a fish.

This book wasn’t merely about the struggle of the man, but the fish as well. Swimming through the ocean searching for food, this marlin happened to be in the wrong place at the wrong time.  There is definitely something to be said for the courage and stubbornness of the fish. Even the old man sees the two as brothers; accounting for the fact that each of them struggles to see who will outlast whom.

Anyone who has faced a major obstacle in life can relate to Santiago and the marlin’s journey. Not all endeavors end so perfectly, the hero doesn’t always save the day. Hemingway understands this and weaves that notion into the book.

For only about 127 pages, The Old Man and the Sea, is a staple read for anyone interested in a well written, classic, and nautical work of fiction.

The Sound of Waves Book Reveiw