A Climate of Crisis by Patrick Allitt: Book Review

A Climate of Crisis was a good read, providing perspective on the dialogue and evolution of environmental progress in the United States.  With all the noise on both sides of the climate debate today, the book was refreshingly balanced and prompted deeper discussion about trends in energy use and the economics of climate change.  Doug’s expertise in energy distribution added to the substance of our discussion.  We also enjoyed the book for its balance and its equal time toward both ends of the climate spectrum.

The book’s guts are a historical chronicling from early reactions to nuclear fallout to the most recent debate on climate change.  The central theme is that change is possible in a democracy when voters perceive imminent crisis.  Today’s shrill debate is exacerbated by the potential spending opportunities (follow the money) and the fact that many of the environmental pioneers of the 1960s are now in positions of influence.

While early public reaction to nuclear testing was muted by a national security ethos, the 1960s saw a broadening of environmental awareness and activism as excessive pockets of pollution of air, water and land had gotten the stark attention of citizens.  Seminal events such as chemical dump site Love Canal and a flaming river in Pennsylvania became flashpoints for a newly wealthy society.  Environmental improvement is a luxury, achievable only after basic necessities are broadly available to citizens.

Capitalism is not necessarily the main problem, but when externalities such as pollution are not part of the cost of business, businesses will seek to keep those costs external.  In an open and democratic wealthy society, where people are willing to pay for the externalities to have clean air and clean water, the costs can be imposed through laws and regulations.   Hank Paulson's article from the NT Times that Chapin sent in promoting a high carbon tax is one example of charging for pricing externalities.  Higher gas taxes such as are common in Europe is another.  The problem with taxing externalities is the inefficient re-use of the tax revenue.

Chuck added that we should also quantify the external cost of keeping the Middle East open and oil flowing.  Add our military and defense budgets dedicated to the Middle East over the past 20 years and the cost of energy externalities becomes something we shouldn’t ignore. 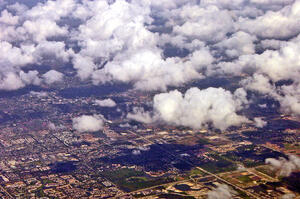 The book also forces us to ask the question: if the climate change prognosticators are right, what can we do now, and at what cost?   And if they're wrong, how much will we as a society spend chasing something over which we have little control?
The problem with climate models is that small changes on any of several variables can yield broad differences in results.  Much measuring is imprecise, and where math models follow the numbers, projections are mathematically imprecise.

We agreed that political interference with cost analyses of non-carbon energy sources undermines the process of accurate estimates.   A good local example is the Cape Wind project, where the federal government recently committed $150,000,000 in loans to the project.  Private capital markets wouldn't fund Cape Wind, so politicians saw to it that taxpayers would.  Doug pointed out that long term costs of maintenance and disposal cannot have been adequately quantified by this process.  After all, mechanical-based power generation, sitting in salt water, will depreciate quickly, changing the entire ROI calculation.  Private capital markets understand this; only politicians with green backing can afford to ignore these economic realities.

Chuck brought up how the scientific method has been compromised by entrenched interests over the centuries.  Thomas Kuhn wrote a great book about the fallacy of ‘affirming the consequences’.  An example in Kuhn's book is the Ptolemaic earth-centric universe, a view accepted for centuries, and still forming the basis of (effective) celestial navigation today.   But we know today it's completely wrong.  One of the problems with the global warming argument today is the broad silencing of views that do not support the paradigm.  Careers are terminated when the paradigm is challenged.  And many businesses, politicians, and scientists are dependent upon the continued funding of the climate crisis paradigm.  One victim of the climate debate today is the integrity of Science.  That’s a shame.

Doug pointed out that our advantage on the world stage may commence when American innovation becomes exportable, to China, to India, and other developing nations as they grow their economies and demand better air and water.  A wealthy nation has resources to create better technology to export.  The question is whether our lower cost of energy will prompt us to seek better energy efficiencies for export.  Some of the best energy saving products today come out of Germany, where the cost of energy is highly taxed.  Higher costs spurn cost saving innovation.  Could innovation prompted by higher gas taxes exceed the cost to the rest of the economy?

When developing nations, particularly huge carbon burners such as China and India will slow their use of dirty energy (coal) because of demand from their own citizenry is an open question.   A well educated and well connected (in China) Chinese student whom Chuck knows personally wants to settle in Boston to avoid the pollution in Beijing and throughout China.  Societies with wealth will pay for clean air and water.  Wealthy societies’ attraction of talent for a cleaner environment is an asset we can cheer.

As to the Malthusian predictions of an end of energy: Doug subscribes to a daily energy news feed called Fierce Energy that predicted today that ... The US will never run out of energy.  (See article here). This was an interesting turn on our earlier book, Midnight in the Desert, where we thought we had learned that ‘peak oil’ had arrived.  Our book club can claim as one of its sujeffccesses new perspectives that change our minds on important topics.

On that note, our next book is Thomas Pickett’s Capital in the Twenty-first Century, an examination of wealth disparity in advanced economies. Left leaning, out of the Paris School of Economics, called groundbreaking by Larry Summers, this book may define the debate on wealth distribution over the next decades, and will definitely go against the grain of most of the group.  It will give us lots to argue about, (including the integrity of the data if you read the Wall Street Journal).