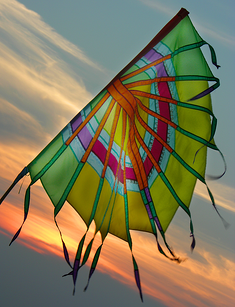 In a senior literature class, I get the opportunity to read some very fascinating works. Several people I know had already read The Kite Runner by Khaled Hosseini before the book was assigned for winter break. I had no idea what was in store for me.

The book takes place over the a quarter of a century in Middle Eastern countries like Afghanistan and Pakistan. Later in the story, the setting switches to California. Eventually, the protagonist returns to his homeland for a noble mission.

Our protagonist, Amir, who grows up in Kabul, feels as if he can never win the affection of his father (Baba). Hassan, Amir's servant and one subject of Baba's attention, keeps Amir company. The two grow up together as best friends- although, Amir never admits to the friendship. Hassan is of a different ethnic race, one that is considered to be very lower class.

Amir wants to win Baba over, and Hassan assists him by helping Amir with a kite contest. While having the last kite in the sky is one prize, running kites and gathering them after they fall is equally as important. The most coveted kite to run is the last one that falls out of the sky. Hassan is a natural kite runner, and he runs the last kite for Amir to present to Baba. However, Hassan runs into some huge trouble as he runs the kite. Amir is faced with a choice: he can either save his friend, or earn his father's affection.

Amir chooses his father over his friend. As a result, Amir is plagued with guilt for the rest of his life. Hassan and Ali, Baba's servant and best friend, leave Baba's house. While Amir is relieved that he no longer has to look at Hassan, he feels as if he never got the punishment he deserved for not saving his friend.

The Afghan government gets overthrown by the Taliban, and Baba and Amir leave the country. They escape to California. Amir gets an education, meets the love of his life, and everything seems fine until he is summoned back to Afghanistan. By this time, the Taliban rule the country and it is a very dangerous place.

Once Amir reaches Afghanistan, he is presented a mission by one of his old, dying friends. Amir has no children of his own, but Hassan has a son. Amir is heartbroken when he hears of his friend's terrible fate (Hassan was shot), but Amir realizes that perhaps he can make up his sin for not helping Hasson long ago, and Amir agrees to rescue Hassan's son, Sohrab. On his way, Amir faces an old foe, saves Sohrab, and finally feels justified.

Just when you think everything's going to be a happy ending, some issues with Amir potentially adopting Sohrab emerge. The ending is not at all predictable. This story has a complex and fascinating plot, and since so many things come full circle I tried not to put in too many spoilers. (Such a good read, you'll thank me that I didn't include everything in the summary!)

This book covers a wide variety of themes. The most prominent in the entire piece are about family, religion, war, love, society, as well as gender and ethnic roles. This novel has it all.

Especially important are the secrets that are revealed in later parts of the book. Tiny details from the beginning come back in a way that is almost haunting. No matter, the story remains beautifully written and engaging.

This is perhaps that most moving piece of literature I have ever read in my entire life. Ever. I couldn't put the book down once I started. I challenge another book to make me think as much as The Kite Runner did. This book made me cry, appreciate, and realize so many different things. Sometimes we think our own problems are bad, but there are people out there who live like this. Although a work of fiction, the events that take place in The Kite Runner are very real.

This book contains many, many mature themes. Taboo topics such as rape, adultery, attempted suicide, and massacre are discussed prominently throughout the book. Part of the reason that this book was so moving is that it explored these topics; they were unavoidable. However, these topics are not discussed lightly. I wish I had time to mentally prepare for everything that happened. This is not a light tale. I found myself hysterically in tears at certain parts of the book, so much that I had to put it down, walk away, and allow myself time to process what had just happened. Do not read if you cannot handle heavy topics.

The Kite Runner was made into a movie in 2007. Hosseini also wrote another novel similar to The Kite Runner known as A Thousand Splendid Suns. While I have not read it, I have heard that it is excellent. Hosseini has another novel titled And the Mountains Echoed that is to be released in May later this year.