The Return of the Native: A Student’s Review 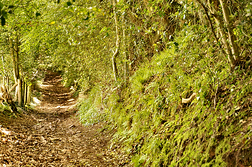 My 12th grade AP literature class just completed reading Thomas Hardy’s novel The Return of the Native, I found it to be a page turning novel that kept me wanting more, but lacked a certain depth.

Set during 1840’s England, this book takes place in a small village called Egdon Heath. “The Heath”, as it’s called by its residence, is a place of beauty, where nature reigns supreme over the inhabitance.

The story of The Return of the Native is mainly a love story between one Eustacia Vye and two of town’s inhabitants. Her prospects are Wildeve, owner of an Inn in the town, and Clym Yeobright, who returns from Paris. Clym is the “native” who "returns." The other main characters include Clym's mother, Mrs. Yeobright, and cousin Thomasin. Thomasin is set to marry Wildeve when the story first opens. Eustacia very much hates the Heath and sees Clym as her ticket out of Egdon and into a Parisian lifestyle. Clym, however, loves the Heath and loathes Paris, creating quite a nice drama between the main characters.

This book certainly is exciting. I quickly was lost in the language and pleased to discover the 19th century writing style did not bog down my interest. Hardy’s elaborate use of figurative language paints a picture of 1840’s England and really sets the tone for each chapter. This book was published similarly to Dickens’s stories like A Tale of Two Cities in monthly installments (Hardy published in the magazine Belgravia), so there is a definite appeal to the reader.

This is not a spoiler, there are in reality two endings to this story. The first upset readers who envisioned a happy ending. Of course making more money from readers couldn’t hurt, so Hardy obliged and wrote a happier 6th chapter to The Return of the Native: wrapping up the character’s story in a neat little package. Unfortunately, Hardy focuses greatly on imagery and descriptions, which can deter readers who desire more action. What bothered me was that he did not really delve into the characters emotions, so it is up to the reader to discover how the characters feel. Some parts of the plot seem to be a little too convenient as well.

I would definitely recommend this book. It does not take too long to read and it’s easy to get lost among the pages and descriptions of Egdon Heath. Although it may seem like a soap opera at times, the novel is well written and interesting. I’d recommend buying a copy unwritten in and taking notes while underlining important passages. It helped me organize the book mentally and really understand its complexity.

The Return of the Native is also avaliable free on Ibooks for now.

After you've read The Return of the Native, check us out at agordon.com if you want to read more of our book reviews or utilize our insurance resources.

A Prayer for Owen Meany Review