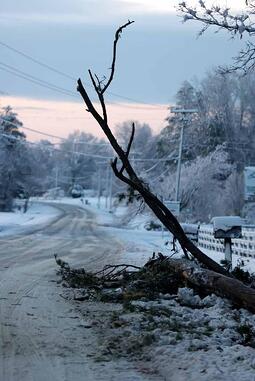 Now that Nemo has left its imprint on the area, we hope that all survived its destructive force and are on the road to normalcy. For those who had to file claims, we hope they are resolved quickly and satisfactorily; and for those who escaped damage to their property, we’re sure you’re thanking the powers that be.

As you may surmise, the agency was quite busy this past week counseling clients and placing claims on their behalf. The majority of the losses involved tree damage, whether it involved trees hitting structures or vehicles, pulling wires off houses, or blocking driveways. Most homeowner carriers provide a limited amount of coverage (usually $500-$1000) for tree debris removal after the deductible. Even then, some companies require that the tree strike a structure before payment will be made.

The combination of several days of power outage combined with frigid temperatures also resulted in several claims caused by burst pipes and cracked furnaces. (To learn how to prevent frozen pipes, click here). These losses may prove to be significant, especially those involving water damage. We recommend taking steps to prevent this from occurring, such as letting faucets trickle, insulating basement pipes, or draining the pipes if power is expected to be out for any length of time and/or shutting off the main water source.

Some coastal homes suffered significant flood damage due to the high tides during the storm.  As you may have seen on recent television commercials following Hurricane Sandy, homeowner policies do not cover this type of loss and the claim would need to be filed with the flood insurance carrier. An important thing to remember about flood coverage is that there is no coverage for contents located in the basement. The items in the basement that would be covered by the building coverage portion of the policy would be the equipment that services the home such as furnaces, hot water heaters, central air conditioners, sump pumps, well water tanks and pumps. Also covered would be the drywall for the walls and ceilings, nonflammable insulation, and electrical outlets, switches and circuit breaker boxes. The contents coverage portion of the policy would cover washers, dryers, freezers and the food in them, and portable air conditioners stored in the basement. Since the basement area is most susceptible to potential flooding it is obvious why FEMA has taken this position.

Let’s hope the groundhog was right this year and that spring is right around the corner!

If you have any other questions about insurance, risk management, or would like some advice involving claims with regards to storms such as Nemo, feel free to contact us at anytime. If you're thinking about a new homeowner's policy, we'll quote you for free! Simply click the button below. Visit our winter storm center here.

Some of the Best Insurance

What is the Passenger Restriction for Junior Operators?
Car Safety: What to Do When Your Windshield Fogs Up
Drunk Driving: Why Do People Do It?
Renewing Plates on a Leased Vehicle
The Simple Math Behind Insurance