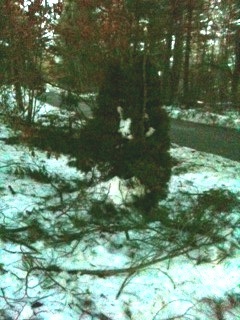 Winter Storm Nemo (dubbed so by the Weather Channel) caused a lot of damage. Whether you want to believe this violent storm was named after the cute little clownfish from Disney/Pixar's Finding Nemo, or after Captain Nemo from Twenty Thousand Leagues Under the Sea, or even after the Latin word meaning "no one", absolutely nemo can say that Nemo was just like any other winter snowfall. (Hahaha, see what I did there?)

However, the effects of Nemo are not a laughing matter. In fact, Nemo caused quite a lot of damage. You can see on the right, a picture of a tree sliced into two from a falling tree branch. (Sorry the quality is bad; I took the pic on my phone.)

More than 97% of my town went without power for days; some homes still do not have electricity. Trees snapped, branches broke, and for the first time since 1978, the Massachusetts governor, Deval Patrick, banned driving on the roads. The penalty for breaking the ban was heavy- a $500 fine and a one-year prison sentence.

Personally, I think the driving ban was well within reason. Granted, my neighborhood is enclosed by lots and lots of trees, and the snow piled up rather quickly. I remember hearing copious amounts of snow falling from the tree branches onto my house and listening to trees snapping as if they were only toothpicks. Snow is heavy, and all the extra weight on the trees caused quite a lot of branches (as well as trucks) to fall to the ground, occasionally taking power lines down with them.

What's even more scary is that trees landed on houses, garages, cars, fences (our fence fell victim to the collapse of a smaller tree) and destroyed A LOT of property. Besides the whole electric inconvenience of not having electricity, the places where people lived got damaged- and that let in even more cold.

Fortunately, my family invested in a generator after Hurricane Irene two summers ago. Thank goodness we did that. Although the summertime is generally warm, with slight chills in the night, the generator during Irene helped a lot. And now, especially that Nemo took place during the wintertime, the generator provided much needed heat to our home when our fireplace couldn't do the job. So, as a word of advice, I recommend purchasing a generator for the next time there's a power outage. With that generator, make sure you buy gas to fuel it (we had to refill ours two or three times before we got power back). And if you plan on investing in one, be sure to do it sooner rather than later. Imagine all the people who think about purchasing generators immediately before storms, and then imagine the stores being out-of-stock when it's your turn to purchase. Don't be that person left out!

If you need to file a claim, click here. If you have any other insurance questions or would like some more safety advice, feel free to contact us.

The Biggest Insurance Discount: Bundling Your Policies Together

What is the Passenger Restriction for Junior Operators?
Car Safety: What to Do When Your Windshield Fogs Up
Drunk Driving: Why Do People Do It?
Renewing Plates on a Leased Vehicle
How to Use Car Defrosters