Give Me a "Brake:" A Teen Driver Story 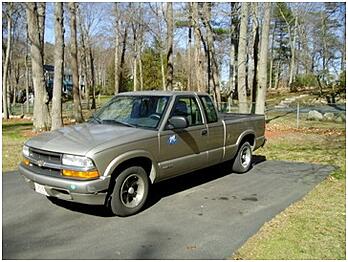 In the final week of my sophomore year, I achieved my yearlong dream of obtaining a driver's license. I was going to use my father’s old 1999 Chevrolet S-10 pick-up truck. This car had all the amenities a teenager could want: it wouldn’t start in the rain, the seat would only adjust with the help of pliers, and solid chunks of black foam would fly out when the air conditioning was turned on. Although I was just thrilled to have something to drive, there was one serious flaw I did not notice until my 4th day of driving alone.

After the last day of school, I was following my friend to his house on the other side of town. About half way there we passed the center of Norwell and turned on to ­­­­­­Central Street. Everything was going fine until we started going downhill. I hit the brakes to slow down… nothing happened. Not entirely true; actually, the brake light came on. Excellent timing, huh?

Despite my fears of crashing or getting pulled over, I made it to my friend’s house. I was able to pump my brakes and slow down some from that. It helped that there were no intersections and the way to his house was all right turns.

When I was finally able to park on my friend's hill, my Dad came and brought the truck to a repair shop, Bruce’s Auto. I apparently had 2 popped brake lines. Thankfully, I did not crash and my car turned out fine.  A few months later, we did sell the truck. Sometimes I take a break (pun intended) and I stop (pun still intended) to think about the old S-10.

Anything can happen on the road, especially when you’re least expecting it. Check us out at www.agordon.com for new driver auto insurance resources such as our teen driver kit. It never hurts to be prepared. Learn more about auto insurance here.

Insurance for a Vacant Home (A Vacant Dwelling Policy)