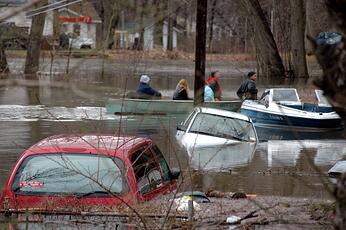 President Obama signed a bill authorizing the continuation of the National Flood Insurance Program (NFIP) on December 23 extending the program to May 31, 2012. This was the sixth last minute extension of the program in the past year and a half, though Congress has worked hard over the past year to pass a 5-year extension with several structural changes.

The NFIP has been around for decades and today is the primary vehicle for providing insurance for about 5.5 million property owners around the country.  Locally, many homes in eastern and southern Massachusetts are insured by or have been rebuilt with NFIP insurance.

In July, the House overwhelmingly passed a bill (HR 1309) that would have made fundamental changes to the program that provides flood insurance to businesses and families around the country. Proposed changes included a gradual path to removing taxpayer subsidies, and put the program on a sustainable footing. But these changes met resistance in the Senate, where the bill died.

The existing program is in trouble. A lingering debt of $18 billion remains on the books from 2005; and big spring rains or a 2012 hurricane could increase that shortfall without notice.

Conceptually the National Flood Insurance Program makes sense: private insurers don’t want to insure against geographically concentrated losses because of an insurance concept known as ‘spread of risk’. The national government can withstand concentrated losses by spreading risks across the entire country. The problem is that the current rates are not developed with the same detail as private insurers do when trying to make a profit.  As an example, in 2006, the year after over $17 billion in losses from Hurricane Katrina, average NFIP rates actually went down.

Subsidized pricing also leads to a problem known as ‘adverse selection’: flood insurance is a great deal if you’re really near the water; it’s not a great deal if you’re only mildly exposed to flood waters. Pressure from interest groups such as builders, developers, realtors and property owners delivers a political angle that prefers the status quo.  However these groups also generally agree that continued temporary extensions can be disruptive as well. State Farm, one of the country’s largest providers for homeowners insurance, dropped out of participation in NFIP in June 2010 in large part due to frustration over frequent temporary extensions.

We were optimistic for long term sustainability over the summer when the House passed its 5-year bill, but are less optimistic today. Congress has been unable to develop a program acceptable to both the House and the Senate over the past year in spite of its structural problems.  We believe now that the program will continue with temporary extensions and without change until after November 2012 elections, or until after the next big hurricane or other flooding disaster puts the program deeper in debt. Given the extension until May 31, we can be grateful that home closings won’t be delayed by the absence of insurance, at least until then.